Life can be an oxymoron. There are many contradictions in life.  My wife likes to eat ice cream when she is cold. I am hot natured but I have to sleep under the covers at night. I am terrified of heights, but I love the mountains.    Most of the time life’s contradictions are small, manageable, and easy to overcome. But there are times when the contradictions that people have within their ideas, beliefs and perspectives are more serious and more relevant.  Moral contradictions fall into that category.

My family and I like to go for walks down a local nature trail near our home.  It isn’t for exercise as much as it is for time together as a family.  We all go, me, my wife, and my three children 14, 9, and 2.  It is an easy pace, no real pressures.  Recently on one of our walks, my middle child said, “well that’s not nice”, I turned to see what she was talking about.  She was reading a sign that read, “Fine for Littering”.  She understood it to mean that it was okay to litter in that designated area.  She didn’t really understand what the sign meant.

As I thought about her statement and perspective, I realized that we often develop our ideas, beliefs and perspectives with misunderstanding. For her to gain understanding and develop the right idea and belief about what the sign said, she needed to have instruction. As we look around in our day to day lives there are many signs that are being used to build our perspective of what is right and what is wrong.  But if we are to build a correct understanding, we too have to be instructed. 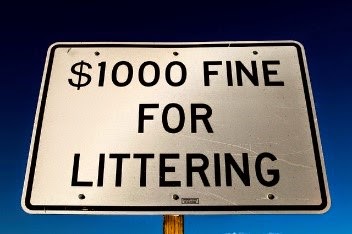 The American Christian Culture is in the midst of trying to deal with many such contradictions. In our ambition to be as inclusive as we should be, we have allowed Christianity to be high jacked by moral contradictions. We have allowed anyone and everyone to develop their own understanding and perspective of what Christianity is or isn’t. What it does or does not mean.  But many of the divisive perspectives of morality can be and are addressed by God’s Word. The challenge is that people are not being instructed.

The mantra “don’t judge” has invaded every denomination, every spectrum of the church from the most conservative to the most liberal ideas of Christianity. Misquoting Mathew 7:1 “Judge not, that ye be not judged” has become a get out of Jail free card. Being judgmental is the religious equivalent of what being racist used to be.  No one wants to be labeled racist, No one wants to be labeled judgmental. Playing the “don’t judge” card is the new race card.  It is intended to shut down discussion and to eliminate any accountability for what we call “Christian”.  In doing so the term has become so blurred and so minimized, that most people really don’t know or understand the differences between “Christian Culture” and the “Body of Christ”.
Today anyone with any view of any issue can call themselves “Christian”. Today in American Christian Culture you can be “Pro-Choice or Pro-Life” and still be “Christian”. You can be for “traditional marriage” or for “marriage equality” and still be “Christian”. Terms like “sexual atheism” and “moral relativism” are on the rise. And while most of these polarizing topics are debated and addressed, there are many more subtle yet equally dangerous moral contradictions within the lives of most “Christians”. The reality is absolute opposites cannot both be equally true simultaneously. There are things which are clearly “right” and clearly “wrong”.

The challenge to change this trend can be overwhelming to say the least.  We are all busy and tired.  Most of us are struggling with the challenges that day to day living present us.  The idea of taking on an entire culture with the ambition to change it are in reality impossible.
Unless, like so many other things, we have an idea about our role in bringing change that is wrong.  I believe we can look to this same misquoted scripture in its context to better understand our role in changing the current course of Christianity in America and the World.
What Jesus said in Mathew chapter 7 does not end at verse one.  Rather, He goes on to teach about the importance of examining our own lives first.  Mathew 7:5 tells us …first cast out the beam out of thine own eye; and then shalt thou see clearly to cast out the mote out of thy brother's eye.

The mistake that we have made for too long in dealing with this issue is that we have drawn sides.  We have camped out in our own way of thinking and have labeled the other side of the issue as wrong while we remain happy in the camp of right.  The fact is that all real change in any measurable way starts with each of us looking at and dealing with self.  Of all the ideas, beliefs, and perspectives out there that I deem to be wrong, the most important ones that I must crucify do not belong to anyone else.  They belong to me.

When we each individually begin to take on the role of crucifying ourselves rather than others, we will be on the road to real and meaningful change.  When being in right standing before the father for my self is more important to me than correcting those around me that are wrong, I will be a credible agent for change in my community, my culture, my country, my world.  And when you do the same, you will be too.